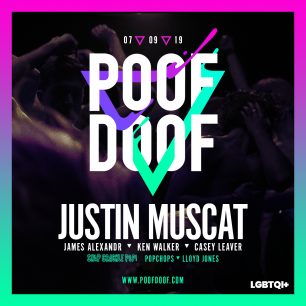 POOF DOOF – A GAY CLUB FOR ALL – PRESENTS 2 VERY SPECIAL GUESTS STRAIGHT IN FROM SYDNEY THIS SATURDAY:

Justin Muscat is the sound that will have your earbuds satisfied right to the core.

Sydney based DJ & producer who started his journey on the other side of the spectrum, growing up in a musical household, he played piano for 8 years before discovering his love of electronic music & quickly smashing his way through the Sydney House & Techno scene.

Justin Muscat is the sound that will have you hooked.

James Alexandr is the fresh new identity and sound from Sydney based dj and producer formally known as JimJam. Under that previous moniker, manning the decks on many a dancefloor or to studio production with numerous own productions and re-mixes released over the past couple of years.

SEE YOU ON THE DANCE FLOOR DOOFERS X