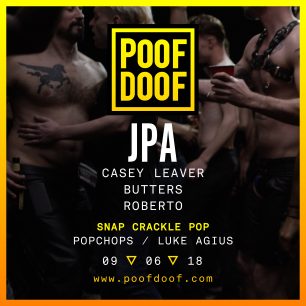 This Mauritian-born Australian has earned his stripes as a DJ over the past decade and is now recognised as one of the most exciting new DJ/Production talents to come out of the great southern land.

2014 saw JPA joining the Chameleon Recording stable, quickly becoming one of their feature artists. He is now a resident performer for Chameleon at their annual Amsterdam Dance Event showcase.

With releases out on several labels such as the well-respected Bush, Ugenius & Chameleon Recordings, JPA has a constant stream of new material with five releases due out in the next few months.

JPA enjoys testing & refining his new tracks on the dancefloor. You can be guaranteed some cutting edge and unheard tunes in a JPA set. His ability to read the crowd in many situations and have the tracks to suit is a credit to his passion as he is able to captivate a younger crowd alongside a more musically educated generation. His sound can be described as a perfect balance between techno and the soul of house and he is without a doubt one of the most versatile DJ’s on the scene right now.

He is the ideal choice for headlining a club event or supporting the big name local and international acts. Having already performed at home grown events such as Future Music Festival, Earthcore & The Petting Zoo to name a few, JPA is a sure bet to be included on several of the larger festival events over the Australian summer.