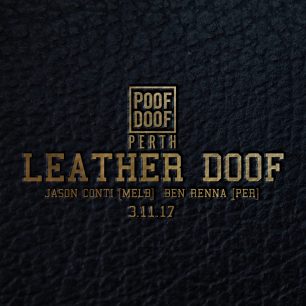 PERTH LEATHER LOVERS – THIS ONE’S FOR YOU!

WE’RE BRINGING ONE OF OUR FAVOURITE PARTIES TO Connections Nightclub ON FRIDAY 3RD NOVEMBER:

A LEATHER PARTY FOR ALL THE BEARS, CUBS, DADDIES, OTTERS AND DOOFERS TO COME TOGETHER, HARNESS THEIR JOY AND RIDE THE DANCE FLOOR TIL DAWN.

Ben Renna is a Perth based DJ featured at many of Perth’s premier venues, with current residencies at Voyeur Bar, Lost Society, The Aviary Rooftop, Coast Beach Club, Avenue Nightclub and more. Ben has branched out to perform at various Perth events, festivals and made guest appearances on the East coast. Classically trained in piano from a young age, his musicality is reflected in his thorough track selection and regular collaborations with live musicians.

SO CHUCK ON YOUR CHAPS, GEAR UP AND GET READY TO HARNESS THE DOOF!