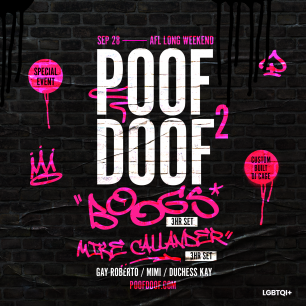 POOF DOOF PRESENTS AN UTTERLY INCOMPREHENSIBLE NIGHT OF UNMISSABLE TALENT, THAT IS AT AN INTERGALACTIC LEVEL.

BRINGING TOGETHER THE TITAN AND GOLIATH OF AUSTRALIAN MUSIC FOR BACK TO BACK, THREE HOUR SETS IN A CUSTOM BUILT DJ CAGE IN THE CENTRE OF THE DOOF FLOOR.

WE’RE BUILDING A TEMPLE FOR THE GODS AND YOU’RE INVITED.

GET UP CLOSE AND PERSONAL WITH DJS WHO HAVE BEEN CELEBRATED FOR THEIR TALENT AND COMMITMENT TO PRODUCING MEMORY-MAKING MUSIC WHILST PERFORMING FOR A GENERATION EVERY SINGLE WEEK IN CLUBS AROUND AUSTRALIA AND THE GLOBE.

BE ON THE SAME LEVEL AS THE GREATS AS THEY TAKE YOU THROUGH A ONCE IN A LIFETIME CLUB EXPERIENCE.

Boogs is one of the true leaders of Melbourne’s underground club scene.

His three-hour Rev sets attract a vibrant, loyal and seriously up-for-it crowd each and every week.

Combining his incredible technical skills with an ear for the best new music, Boogs has consistently maintained a standard in excellence that sets him apart as a truly gifted DJ.

Always visionary and ahead of the pack with the freshest sounds, Boogs’ reign over the Melbourne club scene spans almost 15 years and his influence stretches across Australia and beyond.

As Boogs continues to dominate, the talent and vision that cemented his place at the top of Melbourne club culture is now more prominent than ever.

Mike Callander is one of Australia’s most dynamic DJs, resident of Melbourne’s infamous Revolver, and co-founder of Haul Music and School of Synthesis.

Mike continues to enjoy a loyal following and a hectic schedule. His long-term residencies at coveted institutions such as Revolver and formerly at Honkytonks, for which he also released a mix CD “The Last Dance”, are the stuff of legend. At the same time, he regularly visits important international destinations such as Rex Club in Paris and Berlin’s Watergate.

PROUDLY SUPPORTED BY Gay Roberto, THIS IS A DOOF NOT TO BE MISSED.

THIS IS THE ONE YOU’VE BEEN WAITING FOR.

TICKETS ARE ON SALE NOW:
https://www.eventbrite.com.au/e/poof-doof-squared-ft-boogs-mike-callander-tickets-70877942835

POOF DOOF: A GAY CLUB FOR ALL.