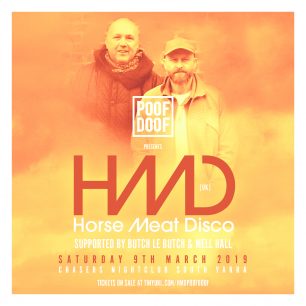 SUPPORTED BY:
Sydney Mardi Gras headliner BUTCH LE BUTCH
Long after America declared that was disco was dead it was still going strong in Melbourne, Australia where a young impressionable mind began soaking up everything disco had to offer. Butch le butch was born in a world where disco records were plentiful and the making of record/pause mixtapes was king.
After early forays into Melbourne’s house music scene, where Butch cut his teeth playing at various clubs such as The Lounge, 44 & Freakazoid, he found himself gravitating to music that was arm in arm with his disco roots. From deep throbbing bass lines to soaring string filled moments of ecstasy if the song was respectful to its disco roots it was right at home in Butch’s sets.
It wasn’t long before he turned his hand to remixing and re-edits where, along with producing tracks of his own, he reworked tracks by disco legends such as MFSB, The Trammps, Chic & Stephanie Mills as well as highly popular reworks of tracks by Dolly Parton, Madonna and the Jacksons.
With a penchant for all things disco from the serious to the senseless Butch’s sets are packed full of long forgotten gems and dared to be played boogie monsters.
AND ONE NIGHT AT THE DISCO’S MELL HALL
Deep Disco, that’s her genre. She may have made it up, she may have not. But be assured, her world is relentlessly in (musical) time. As one-half of Kolors, she has spun tunes for Carlton Dry, Quiksilver and Red Bull, supported Flume, Anna Lunoe and Disclosure, as well as taking on the Australian and International gig-circuit.Now solo, she’s occupied brand roles for Mini Cooper, David Jones, MSFW, Edwards & Co. and Etihad Stadium as well keeping the dance floors full at Melbourne identities Carlton Club, Revolver and Platform One.
PRE-SALE TICKETS ARE ON SALE NOW: http://bit.ly/PDxHMD // $20 // MORE ON THE DOOR!
THIS IS AN ALL INCLUSIVE EVENT – A NIGHT THAT TURNS INTO A MORNING WITH FRIENDS THAT TURN INTO FAMILY!
SEE YOU ON THE DANCE FLOOR, DOOFERS X
-->