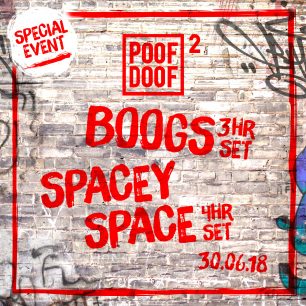 POOF DOOF PRESENTS A VERY SPECIAL EVENT:
POOF DOOF²: Boogs & Spacey Space
BRINGING TOGETHER TWO DJ TITANS FOR BACK TO BACK 4 HOUR SETS.
A BIT ABOUT BOOGS:
Boogs is one of the true leaders of Melbourne’s underground club scene. Supremely talented, original and never reliant on trends, fads or visiting international DJs, his 7am residency at Revolver Sundays is one of the most celebrated, unique and infamous gigs in town. His three-hour sets attract a vibrant, loyal and seriously up-for-it crowd each and every week.
Combining his incredible technical skills with an ear for the best new music, Boogs has consistently maintained a standard in excellence that sets him apart as a truly gifted DJ, inspiring both young and old generations alike.
Always visionary and ahead of the pack with the freshest sounds, Boogs’ reign over the Melbourne club scene spans almost 15 years and his influence stretches across Australia and beyond. The hugely popular Boogs’ Podcast is helping to develop a whole new legion of fans as more and more people discover his music online. As Boogs continues to inspire and entertain, the talent and vision that cemented his place at the top of Melbourne club culture is now more prominent than ever.
A BIT ABOUT SPACEY SPACE:
Part man, part myth, Spacey Space has been an exuberant presence in the Melbourne dance music scene for over 25 years. He is perhaps best known for his epic DJ sets performed in a converted parachute factory in Prahran, also known as Revolver Upstairs. Playing not one but two 4-hour sets every Sunday, this residency spans over half his career.
Humble beginnings as most beginnings are, Spacey’s love of bringing music to the masses started by recording radio shows on his parents’ stereo and making countless mix tapes. This hobby led to buying some records and his first gig, his own 21st birthday.
The 90s saw him develop his record collection along with his skills. He established residencies at Lounge, Centriphugal, Honkytonks and the aforementioned Revolver Upstairs. Playing sounds from all along the house and techno spectrum, he hosted a popular radio show on Kiss 90 FM, and played in Melbourne’s emerging warehouse party and rave scene, including various Hardware and Earthcore events.
Spacey Space’s upward trajectory has continued into the new millennium and shows no signs of slowing. Signing with Suckmusic has him back in the studio with the production flame reignited, working on some releases due in the new year.
Not one for complacency and with a penchant for taking risks, Spacey’s DJing moves from strength to strength. You’ll find him playing at clubs all across Australia and of course in his hometown of Melbourne where he is also a regular on the festival circuit.
While his career moves into the stratosphere, Spacey’s feet remain firmly planted on the ground. Inspired not only by the music he plays but who he plays it to, there’s a mutual respect between DJ and dance floor that sees the people taking him higher as he sends them into space.
ONE MEGA NIGHT.
8 HOURS OF THE BEST MUSIC ON THE PLANET.
LETS DOOF.