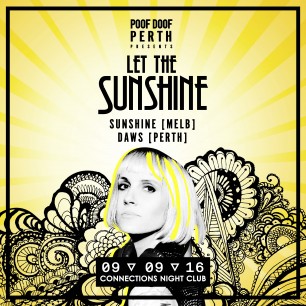 PERTH. WINTER IS OFFICIALLY OVER.

ITS TIME TO LET THE SUNSHINE.

QUEEN OF POOF DOOF – Sunshine – WILL BE HEADING WEST TO HEADLINE THE NEXT PERTH DOOF. AND WILL BE ABLY ACCOMPANIED BY LOCAL HERO #DAWS

HAVING BEEN A RESIDENT AT POOF DOOF SINCE ITS INCEPTION, SUNSHINE KNOWS HOW TO DOOF. SHE WILL SHOW YOU THE WAY.

HERE’S A LITTLE MORE ABOUT HER FOR YOUR FILES: