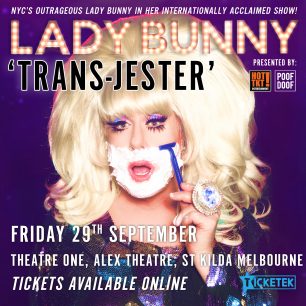 Foul-mouthed drag legend Lady Bunny usually shies away from politics – because it’s one hell of a train wreck right now. But she doesn’t shy away from gender politics.

From the new pronoun we’re forced to learn every time Will Smith’s son puts on a dress, to Caitlyn Jenner reaching out to Republican presidential candidate Ted Cruz to become his ‘trans ambassador’, Bunny feels that it’s time for the gloves to come off.

Trashing the current overemphasis on political correctness, Bunny breaks down some of the latest buzzwords that we’re all supposed to remember for every occasion.

The self proclaimed ‘pig in wig’ brings her trademark huge hair to astound and offend – prepare to be challenged.

WARNING: “Trans-Jester! is vulgar and tasteless humour which seeks to offend. If that’s not your cup of tea, please skip this one – you’ll hate it. But if you like sick humour and are prepared to laugh and be challenged a bit, grab your tickets now!

‘A scream for sanity from the nastiest, most big-hearted comic around’
John Cameron Mitchell