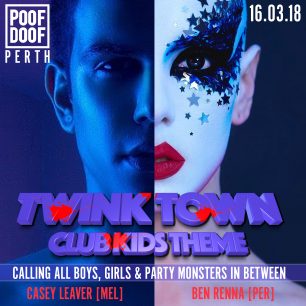 GET READY TO COME ON DOWN TO TWINK TOWN!

IF YOU’VE EVER WATCHED THE 1999 CLASSIC MOVIE “GO”, THERE’S 102 MINUTES OF #COSTUMEINSPO RIGHT THERE FOR YOU.

“You might not know her as the girl swimming in spaghetti, making famous boiler room appearances or even starring in a hit music video, but chances are you’ve already crossed paths with Casey Leaver. This upcoming DJ from Melbourne has been living, breathing, dancing, working, pushing and soaking up the dance scene in her city since the early 2000’s. You’re probably more used to seeing her work the dancefloor, but as of 2016 you can catch her workin’ and twerkin’ the DJ controls. Casey uses her knowledge of the scene to pump out the right tunes and the right time and makes the space in front of the DJ booth some hotly contested property. Word is spreading fast and she has been playing regular sets at institutions such as OneSixOne, Pawn & Co, Revolver Upstairs and POOF DOOF. Casey has so far supported heavyweight producers such as Prok + Fitch, Julian Jeweil, Emanuel Satie, Max Chapman, Lovebirds and Late Nite Tuff Guy.”

CHECK HER OUT ON MIXCLOUD:
https://www.mixcloud.com/casey-leaver/

“Ben Renna is a Perth based DJ featured at many of Perth’s premier venues, with current residencies at Voyeur Bar, Lost Society, The Aviary Rooftop, Coast Beach Club, Avenue Nightclub and more. Ben has branched out to perform at various Perth events, festivals and made guest appearances on the East coast. Classically trained in piano from a young age, his musicality is reflected in his thorough track selection and regular collaborations with live musicians.”

CHECK BEN OUT ON SOUNDCLOUD:
https://soundcloud.com/renna

THIS IS AN ALL INCLUSIVE, DRESS UP EVENT FOR ANYONE WHO WISHES TO DOOF FROM DUSK TIL DAWN WITH US!