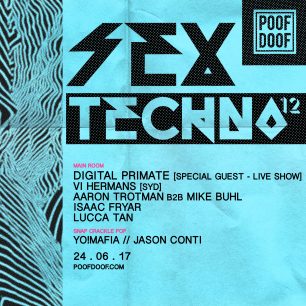 THIS SATURDAY WE CELEBRATE 1 YEAR OF SEX TECHNO.

Digital Primate has produced, collaborated with and performed alongside some of the world’s greatest electronic producers and DJs.

From being in the studio with Mad Professor to collaborating with Carl Cox to inviting DJ Krush to be his plus one guest artist on a rooftop soundsystem show in Melbourne, Digital Primate has always been doing things in his inimitable fashion.

He has DJ’d in the hallowed dungeons of legendary Berlin club Tresor alongside DJ Rolando, Surgeon and DJ Hell. He has had coffee and discussed the finer details of minimal music in hushed tones with Mark Ernestus (of Maurizio and Rhythm and Sound fame)

His early techno releases through respected underground label Pro-Jex in the early 2000′s set him apart as a producer with something to say.

His album releases in 2005 and 2009 (both mixed by Mad Professor) garnered worldwide respect and led to him working with Carl Cox, producing hot new up and coming act Metals and performing around the world.

His DJ sets are legendary in Melbourne due to his long running night Centriphugal being a staple amongst the electronic music lovers of his home city.

Digital Primate has just returned from touring Europe where he collaborated with some luminary artists for his next album. Digital Primate says the direction this time is a more purist one, focussing on the dancefloor, but with some vocals from himself and others… His collaborations on this record include UK reggae vocalist Kar’Melody, Australian ex-pat ASKII (Adam Milburn), UK techno producer and DJ Jon Rundell, and local genius Ehsan Gelsi.

As a performer Digital Primate is now focussing on his live show, he collaborates with video artist/director John Power and other live electronic musicians such as Ehsan Gelsi and Byron Scullin to create a dynamic, genre bending and exciting event incorporating live visuals (generated on the fly by John Power) and extreme frequencies, as well as his trade mark dancefloor funk. Digital Primate straddles the experimental world of sound art and purist dance floor beats. He dissects time in interesting ways, pulling apart rhythmic structures and building them up again in unexpected structures. His aesthetic is one of chaos and decay underpinned by the deep relentless throb of the always present kick drum (even if it is sometimes very subliminal).

He performed live at his most recent Digital Primate + 1 event at the Lounge in September where his guest was the legendary pioneer of UK bass culture, Photek.

His latest live performance was on Carl Cox’s stage at Stereosonic festival. The show included live visuals, dramatic dancefloor mayhem and was so well received that he was asked to play for longer than the allotted time, to which he and his live collaborator Ehsan Gelsi happily obliged.

More recently he has DJ’d at Rainbow Serpent festival, performed live at FRL festival and was headline artist at the Mona Foma – Faux Mo event in Hobart, Tasmania