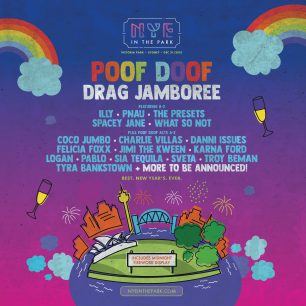 Bringing future forward sounds and high energy extravaganzas to New Years Eve In The Park is the one and only POOF DOOF JAMBOREE!

Presenting our own fully themed LGBTQI+ side stage this year, Australia’s biggest queer party brand POOF DOOF are bringing a rainbow glitterstorm to Victoria Park serving equal doses of fierce and fun right up until midnight!

Expect huge sets from the biggest queer DJs on the Australian scene including Sveta, Charlie Villas, Troy Beman and Pablo.

The POOF DOOF JAMBOREE are incoming so turn up those lewks and get ready to flip your wigs, sis! Oh and don’t get caught out by the heckling queens on entry – those divas are looking to roast anyone who dresses beige to New Years Eve!