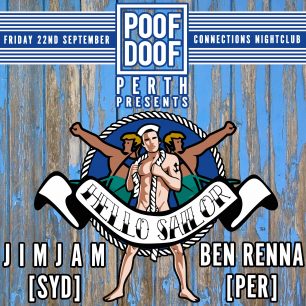 JimJam is an expat Brit living in Sydney whose music reflects his UK roots. He quickly become a regular resident at numerous reputable club nights in Sydney before word caught on across Australia and regularly spins interstate.

Proof of his talents behind the decks is that each time he plays these venues he is instantly re-booked.

The core of JimJam’s sound is house – this can range from deeper to a more upfront tougher and techier edge. He has a knack of playing the familiar with the more underground, deftly combining familiar tunes and the lesser known, but always avoiding any cheesy sounds. His style means he is guaranteed to get a crowd quickly on the dance floor – and keep them there.

While difficult to pigeonhole his sound, he has carved out a reputation with a fused sound of chunky tech, melodic, energetic and bouncy, house – throw in a dash of vocals and you’ll get close.

In the Summer of 2014 JimJam performed on a mini tour in the UK – including Beyond, Room Service and Aftershock at Manchester Pride where he had the dancefloor jumping and begging for more when he finished – he was been booked again for next years event.

Alongside international circuit star Dan Slater, in spring of 2014 he formed the successful clubnight night Therapy in Sydney to showcase the less commercial music than usually fare on offer in Sydney. The musical recipe has proved right as the night has been gone from strength to strength and it’s events are now full to capacity.

In 2016 JimJam was one of the dj acts on the main stage for Big Gay Day in Brisbane – supporting Bimbo Jones, Crazibiza and Sneaky Sound System.

JimJam’s reputation is firmly cemented across Australia and with his great ear for quality, his enthusiasm, smooth mixing skills and ability to read a dancefloor, and his first foray into the studio resulting in his first 3 original tracks being signed by European label House Sessions in 2016.

2017 has kicked off in a big way for JimJam. He has been selected as one of the few Australian DJs for Sydney Mardi Gras as one of the headline acts for the Hordern Pavilion.

His co-produced original single “Minute of You “ was released worldwide in February and demands for his remixes of other artists have sky rocketed since. Including Alex Mills, The Bent Collective and Voice winner Alfie Arcuri new single.

Ben Renna is a Perth based DJ featured at many of Perth’s premier venues, with current residencies at Malt Supper Club, The Aviary, Matisse Beach Club and Avenue.

Ben has branched out to perform at various Perth events, festivals and made guest appearances on the East coast.

Classically trained in piano from a young age, his musicality is reflected in his thorough track selection and regular collaborations with live musicians.

ALL ABOARD SS DOOF, HOMOS! ITS TIME TO PARTY LIKE PIRATES!