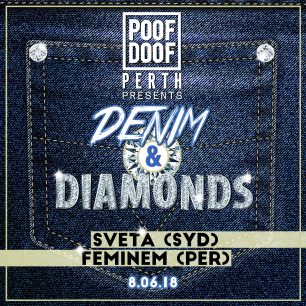 WE ALL KNOW DIAMOND’S ARE A GAY’S BEST FRIEND… NOW ITS TIME TO SHOW THEM OFF PAIRED WITH YOUR MOST DELUXE DOUBLE DENIM!

From Sydney’s fiercest and dearest club nights through to the underground parties that line New York City’s sub-cultures and beyond, DJ Sveta has been socking it to audiences fresh from behind the decks for almost two decades.

Pioneering club nights such as Queer Central and Sissy, this homegrown DJ and Producer is considered spinning royalty in her hometown of Sydney and has worked every veritable corner of the scene — both above ground and below — to master a sound that is quintessentially Sveta.

The company this unique talent keeps is testament to her work. Regularly on demand, Sveta continues to work the stage with both legendary and emerging DJs who share her passion for breaking new ground.

Sveta suppored Chicks on Speed and Gonzales & Feist in the Hot House at the Big day Out, The Detroit Grand Pubahs and Larry Lee at Killer for Fuzzy, DJed at a Patricia Field Party in New York and launched the Sydney Opera House’s Recording Studio with Dieter Meier from legendary electronic band Yello.

Residencies have spanned The Hellfire Club through to Chinese Laundry while invitations to play at iconic parties such as Sydney Mardi Gras and Tropical Fruits as well as various Festivals are always open and regularly accepted.

From her foray into music as a radio DJ on underground community radio station 2SER-FM and FBI, Sveta has kept one foot planted in the medium by working her magic across the 2Day-FM Mardi Gras radio broadcast live to 600,000 across Sydney and most recently as recently headliner and Music Director for the RDIO radio Australian Launch.

While she is celebrated locally with accolades including Best Local DJ from 3D world magazine and Best DJ award in the Best of Sydney Awards, Sveta has equally made her mark abroad in cities including New York, London, Paris, Italy, Japan, Copenhagen and Toronto.

+ A VERY SPECIAL PERFORMANCE AT 2AM!

MORE DETAILS TO BE RELEASED SOON BUT SAVE THE DATE!